Nasopharynx cancer affects men more frequently than women and it occurs between the ages of 35 to 55 years. Nasopharynx also called as nose cancer in which cancer cells develop from the tissues of the nasopharynx. Normal cells grow, divide and replace themselves in an orderly manner. Body relies on this orderly activity to repair injuries and replace worn-out tissue. Besides that, Cancer develops when these cells divide too rapidly and grow without control. Too much tissue is produced and a tumor begins to form. This tumor can be malignant (cancerous) or benign (non-cancerous). 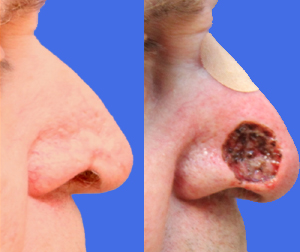 There are several ways to confirm this nasopharynx cancer. They include nasendoscopy, biopsy, computer tomography, magnetic resonance imaging and positron emission tomography.

Nasendoscopy used of a long narrow flexible, lighted, tube that is inserted through the mouth or nose to look at the nasopharynx for abnormal growths, bleeding, or other signs of disease.

Biopsy is taking a sample of abnormal tissue for examination under microscope to help in diagnosing the disease. Other than that, it can be done during nasendoscopy. A report describing the type and extent of the cancer will be sent to the patient’s treating doctor.

Computer Tomography also called as CT scan which one of technique for constructing pictures from cross-sections of the body by imaging the body from different angles. Radio-opaque dyes are usually injected first to enable the body structures to show up clearly under x-ray. The information then fed directly into a computer to build up detailed cross-section pictures of the head and neck structures.

These diagnose used magnetic fields instead of x-ray to detect tumor and look out for any spread to the lymph nodes.

These diagnose is an injection of a glucose solution containing a very small amount of radioactive material is given to the patient. Then, PET scanner will detect and show the areas where the radioactive substance is being used in the body.

Bone scan is used a low level radioactive substance that is injected into the patient to pick up cancerous areas in the bones. The aim of this procedure is to detect any cancer spread from the nasopharynx to the bones.

A risk factor is anything that affects a person’s chance of getting a disease such as cancer. Different cancers have different risk factors. There are several risk factor of nasopharynx cancer:

There are about twice often in males rather than females for nasopharynx cancer.

Nasopharynx cancer is most common in southern China including Hong Kong, Singapore, Vietnam and Malaysia. The whites born in the United States have a low risk of nasopharynx but whites born in China have a higher risk.

If people have a family members with nasopharynx are more likely to get the cancer. It is not known if this is because of inherited genes, shared environmental factors (such as the same diet or living quarters), or some combination of these.